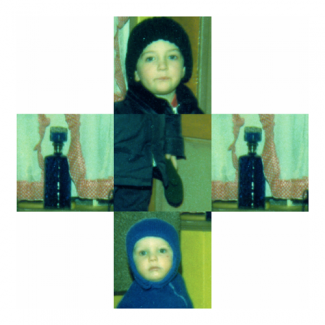 confession 1
I don't really know what to say about this music. I mean, it'd be great if I could tell you how it poured out of me in a burst of creative passion, that it's a confession in sound of my inner angst.

But that's not true.

It would also be great to go the other way: say that it's a carefully calculated set of relationships in sound and time, holding the secret code to some amazing bit of intellectual epiphany—a treatise on a digital religion.

But that's not true either.

Here's what is true: this music is noisy. It's not noisy because of some passionate need for emotional catharsis through sound. Nor is it a densely layered discourse of aggressive sounds illuminating complex ideas and philosophies. It's just noisy, for neither passion nor reason.

It's noisy because I thought, 'What the fuck? Let's make some noisy tunes.'

I know, that's boring, and hardly worth reading these notes to find out. And it's not to say that the music doesn't mean anything or that I'm not trying to say something with it. There are no words for it is all, just sounds.

confession 2
This music is not original. The ideas are plagiarized. First of all, they are plagiarized from me, from another project I did a few years ago call 60x365. This was a podcast for which I created a new one-minute piece every day. Each track here rips off an idea I had for a piece in the podcast.

It's nicer to say that I used this album as a chance to re-examine and expand earlier compositions that weren't given a proper treatment the first time around.

It's truer to say that I wasn't in the mood to figure out new ways to make noises so I reused a bunch of previous work.

Second of all, those 'original' ideas were rip-offs too. I can't (or won't) say what of, but I do know that I've had only a very few original ideas about music in my life, and these ain't them.

Besides, isn't it the execution of the idea and not the idea itself that counts? I keep telling myself that and praying (not literally) that it's true.

confession 3
I don't give a shit that my ideas aren't original and that I don't have anything insightful to say about this album.

Confessions of a Digital Proselyte is volume two of ImDM, a series of projects dedicated to exploring electronically produced, beat-based musics.

ImDM is a series of projects dedicated to David Morneau's exploration of electronically produced, beat-based musics. Confessions of a Digital Proselyte is volume 2 of the series.