David Morneau is a composer, producer, and trombonist whose diverse work illuminates ideas about our culture, issues concerning creativity, and even the very nature of music itself. Since 2016, David has collaborated with composer and producer Melissa Grey. Their practice—described as “inventive”, “imaginative”, and “a delightful romp through a completely unique sonic world…wholly original”—is an ongoing exploration of sound through music. In March 2023 they will release Always Becoming, an EP of music composed in collaboration with designer and musician Robert Kirkbride of studio ‘patafisico. Upcoming projects include work with cellist Kate Dillingham, with violin duo Miolina, and a series of ongoing collaborations with artist/photographer and graphic designer Angela Grauerholz. 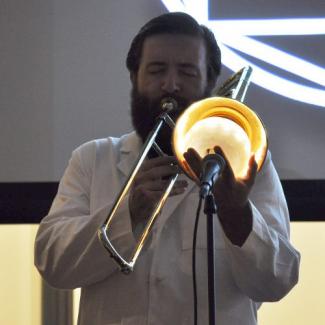