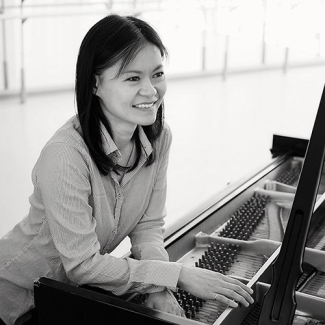 A native of Taiwan, pianist Shiau-uen Ding is an energetic performer of traditional and contemporary repertoire. She studied piano with Eugene Pridonoff, Elizabeth Pridonoff, and Lina Yeh, computer music with Mara Helmuth and Christopher Bailey, and contemporary improvisation with Alan Bern at National Taiwan Normal University and University of Cincinnati, where she received her doctoral degree. She lives in New York City.

She has performed in France, Germany, Belgium, China, and throughout the US and Taiwan. She was called a "daredevil" by The New York Times for her performance at Bang on a Can Marathon and "a powerful force on the new music scene" by Array for her performance at Spark Festival in Minneapolis. She has collaborated with internationally renowned performers and composers, including Steve Reich, Michael Kugel, George Tsontakis, who refers to her rendition of his Ghost Variations as a "monster performance," and Moritz Eggert, who dedicated his Hämmerklavier XIX: Hymnen der Welt (Afghanistan bis Zimbabwe) to her. She has recorded for Capstone, Centaur, Innova, and Electric Music Collective.