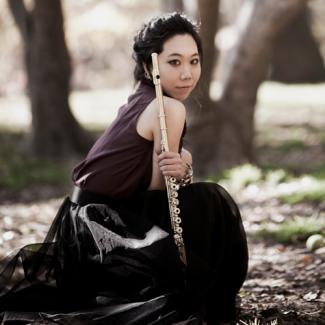 Praised as “A rare virtuoso of the Flute” by Libération, flutist Sooyun Kim has established herself as one of the rare flute soloists in the classical music scene.

Since her concerto debut with the Seoul Philharmonic Orchestra at age ten, she has enjoyed a flourishing career performing with orchestras around the world including the Bavarian Radio, Munich Radio, Munich Chamber and Boston Pops Orchestras. She has concertized in Budapest, Paris, Munich, Kobe, and Seoul; and at the Gardner Museum, Kennedy Center, and Carnegie, Alice Tully, and Jordan halls.

Last season, she gave her European debut recital at the Auditorium du Louvre which resulted in immediate engagements for additional recitals in Germany, Finland, Denmark and Sweden. In summer of 2012, she served as an Artist in Residence with the Danish Chamber Players in Denmark where she curated and collaborated with the ensemble in their annual festival “Summermusic in Fuglsang”.

Ms. Kim has received numerous international awards and prizes including the third prize at the Munich ARD International Flute Competition and the Georg Solti Foundation Career Grant. She studied at the New England Conservatory under the tutelage of Paula Robison. In addition to her musical training, she studied baroque dance with Melinda Sullivan.

Ms. Kim is an Artist Member of the Chamber Music Society of Lincoln Center.