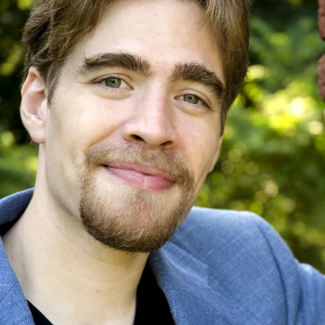 Pittsburgh native William McNally has been musically inclined since the age of three, and began his formal piano studies at age seven. Shortly after his ninth birthday, he performed for the first time in Carnegie Hall’s Weill Recital Hall as a winner of the AMSA World Piano Competition; he has since played there three more times, once in Stern Auditorium as principal bassist of the Mt. Lebanon H.S. Orchestra, again in Weill Hall in a solo piano recital as winner of the Artists International competition, and most recently in Zankel Hall as director of two opera-shorts presented by the Remarkable Theatre Brigade.

In December of 2013, Mr. McNally released a recording of works by Brahms, Reger and Busoni as part of the Victor Elmaleh Collection of piano recitals. Anthoni Tommasini of the New York Times has called his playing “exhilarating” “adventurous,” and “commanding,” and Rob Haskins of the American Record Guide lauds Mr. McNally’s “crystal-clear articulation and phrasing” and his “indefinable enthusiasm.”

A multifaceted musician, Mr. McNally has been widely recognized as a ragtime pianist and composer. He is the first three-time winner the World Championship Old-Time Piano Playing Contest’ New Rag Contest, and has appeared at ragtime festivals around the country. A CD release follows his particular interest in modern and classically trained ragtime composers, including Bolcom and Godowsky; currently, Mr. McNally is writing his doctoral dissertation on the reception history of revival-era ragtime composers. He has presented a paper on the transatlantic voyages of ragtime at the Society for American Music 2014 Conference.

Two more CDs are on the horizon for release. Mr. McNally was awarded an Elebash Grant to record – for the first time – the complete solo works of novelty-pianist Arthur Schutt, alongside works by Vincent Matthew Johnson and Art Tatum, and will debut in the spring of 2014. A CD of Bolcom, Albright, Stravinsky and Mr. McNally’s own compositions is forthcoming in late 2014.

In the spring of 2008, Mr. McNally inaugurated the Music4MS concert series, in an effort to raise funds and awareness for Multiple Sclerosis. He produced, directed, performed on, and wrote program notes for the series, which featured some of the brightest rising stars on the classical scene. Since 2011 he has served as Artistic Director of the Music at St. Luke’s concert series in East Hampton, where he has presented such artists as the Amphion String Quartet, pianist Daria Rabotkina, TenetNYC and tenor Robert White.

Mr. McNally is a veteran of numerous summer festivals, including Aspen Music Festival, Music Academy of the West, and Mannes’ International Keyboard Institute and Festival. In the summer of 2010, he received a fellowship to attend the Tanglewood Music Center. There, he collaborated on a premiere dance performance with the Mark Morris Dance Company, coached with musicians including Emanuel Ax, Peter Serkin, Dawn Upshaw and Oliver Knussen, and his performance of George Perle’s Concertino for Piano, Winds and Timpani was hailed as a “powerful performance” by the New York Times. Mr. McNally’s affiliation with Pianofest in the Hamptons spanned five seasons, where he was named Dean of Students. The roast chickens he produced there still garner raves.

With his wife Daria Rabotkina, Mr. McNally studied at the Mannes College of Music, receiving Bachelors and Masters of Music degrees in piano performance. Following Mannes, he received a second Masters degree from Temple University, this time with a double major in piano pedagogy and chamber music. There he studied piano with Harvey Wedeen and collaborative piano with Lambert Orkis. He has performed in the master classes of such artists as Sergei Babayan, Claude Frank, Paul Schenly, Peter Serkin, Arie Vardi and Earl Wild, to name a few.

Recently, Mr. McNally served as Adjunct Professor of Piano and Artist-in-Residence at Temple University and taught at Settlement Music School. Currently he is in pursuit of a Doctor of Musical Arts Degree at the City University of New York’s Graduate Center as a recipient of an Enhanced Chancellor’s Fellowship; there he studied with Ursula Oppens. He also serves on the faculty at Baruch College and has worked as a writing fellow at Queens College. An amateur cyclist, he rode the 340-mile Great Allegheny Passage from Pittsburgh to Washington D.C. in three days.

The Ballad of Milt Famey || Piano