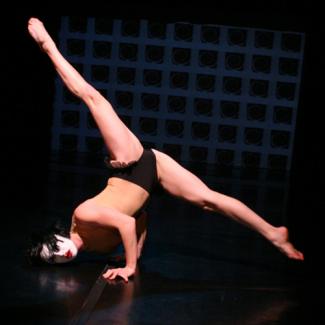 Meet Anna. In Anna & The Annadroids: Memoirs of a Robot Girl - an interesting combination of modern dance, techno music, social commentary, science fiction, multimedia, and a bit of burlesque – Anna is an android who is made of ”pure synthetic organic flesh”. So instead of being made only of metal with a “mind full of microchips” she’s got a heart filled with “…love…passion…confusion…pure sexuality”. The dancing and aerial acrobatics of Anna Sullivan (Anna), are accompanied with ambient, driving techno beats created by various artists which she performs while wearing beautiful costumes created by Elizabeth Harzoff. The acrobatics seem to correspond to times of dreams (whether regular or daydreams) as something seems to be making her concentrate on something other than reality.

The rest of Anna’s real life, including two other characters (the Doctor and Nurse) are represented by projected comic/graphic novel style drawings (expertly done by Natalya Kolosowsky and Grace Passerotti) and robotic sounding voices which lie in striking contrast to Anna’s very “human” sounding voice which we hear in the interludes between dances.

Coming of age for an organic robot with an increased capacity to dream can be quicker than expected, and can sometimes be dealt with cruelly. During her few days portrayed in this show we see her cope with basic emotions of belonging and we watch her struggle with working in an ad business which requires her to “feel” what she doesn’t feel in order to sell products. She can’t possibly live that type of lifestyle as she is an android living by herself most of the time. It seems the main conflicts arise from the Doctor who created her. (Or, more to the point, switched her on, as it is inferred that Anna is just one of the Annadroid models in a long android line). He assumes she will think the way he thinks because he programmed her a certain way. The sensual components seem to be a drawback for the owners of Amerifluff (the fictional company which created Anna), but are a great pro for us, the audience, because it powers Anna’s dancing … which is her way of exploring her struggle to understand what it means to be “human” even if it is only in her synthetically created way.

Lighting is very important in this show – whether a spotlight following Anna as she dances (or is in the air), or the subtle colors that complement the video projects on the screen, lighting designer Michelle Marcus does an exceptional job at blending it all in. There are a few art video components of the show (Plastic Pleasures, Touchy Buttons, and Love Dream were all done by James Tyler) which are high quality and deal with the issues of consumerism as well as illustrate the emptiness of many modern relationships due to technology. These videos help advance the plot along as we realize that Anna the Annadroid is becoming more and more discontent with the commercial culture in which she has become enmeshed via her creation. It’s torturing her, due to the emotions hardwired into her circuitry – ironically added to make her better connect with customers.

And she dreams … because it is so much more real than real life. Eventually (2 days after her creation) she wanders into a club and leaves a “hot mess”. This creates bad publicity for Amerifluff so it is decided to put Anna in the Annadroid dungeon for a bit. Later she will be reprogrammed without the emotional capabilities she was originally bestowed because they only lead to “inefficiency”.

There is then a very touching scene near the end called Rewind-A-Spine that documents Anna restitching her personality to deal with the madness that is the Annadroid dungeon but also represents the brief pieces of Humanity she has interacted with. Much of the musical accompaniment is driving yet almost trance inducing techno by many artist including: David Morneu, Anna Sullivan, Jennifer Agnew, (and additional audio and sound design by Allen Dicenzo).

All in all it is well worth seeing if you like android fiction, thoughtful burlesque or simply beautiful modern dance. Only a few more shows left to explore Anna live in New York, before she only becomes a virtual presence on the internet via the Amerifluff site.