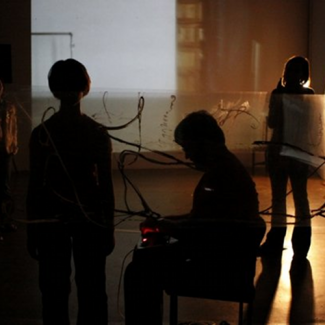 Box Shy was the first of these pieces. Esther began the process with a video-taped dance. Shana continued by adding animation to the video. I completed the process by composing music for the piece. Then we headed into the studio and reworked everything into a live performance version, replacing the video-taped choreography with new movement and replacing the animation with a scroll that would be unwrapped by the audience to create a box in which Esther and I performed.

Read more about this process on the Seen Performance blog.