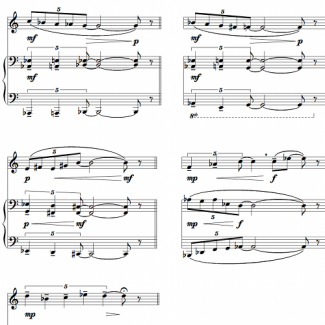 Snapshots was a commission from a friend, Jonathan Whitman, who wanted a gift for his wife on their fifth wedding anniversary. She plays piano and he plays french horn.

Every long term relationship is remembered as a series of isolated moments: snapshots. These moments—public joys, private jokes, intimate conversations, passionate disagreements—combine to describe the experience and essence of a relationship.

I represented this idea in the music by composing a series of separated phrases that combine to create the completed piece. This separation is reflected in the notation. The score resembles a photo album—each phrase occupying its own place on the page.

I also obsessed on the number 5. There are 5 short ‘movements’. The first four are 5 measures each; the fifth is twenty-five measures (52). Most measures contain only 5 notes per instrument (though the piano is sometimes treated as two instruments: L&R). 5 note harmonies and quintuplets abound.

In performance, both players should share a single score. Separations between measures and movements should be deliberate, but not over-long. The piece should ultimately feel like a single cohesive movement. Tempo and style markings are deliberately vague, interpret as desired. Finally, when no pedal markings are present, the pianist should ad lib.