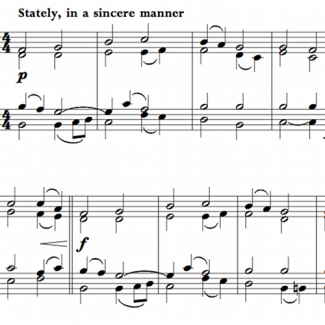 As a form, variations have long fascinated me. While studying trombone I encountered many examples of theme with variations in the literature, most of these written by performers more interested in virtuosic displays than in fully wringing the musical possibilities from a tune. I spent a lot of my practice time determining which notes and figures in each variation corresponded with which notes in the original melody. When I began to study composition, I worked with this form to learn my craft. It was an effective way to explore efficient and creative use of melodic material. I have returned to the variation form after almost a decade to further hone my skills and grow as a composer.

The theme for this set is the chord progression from George Gershwin’s I Got Rhythm (called simply rhythm changes among jazz musicians). Variations on harmonic rather than melodic themes are nothing new; Bach’s Goldberg Variations—and indeed every improvised jazz solo—are just that. My desire was to use rhythm changes to focus on differences in mood and in the established canon of piano literature. The end result is a set twelve short compositions that are related only through a common harmonic. In some cases, Gershwin’s harmonies are readily apparent and at other times they are relegated to a structural role, away from the surface of the music, where they guide the composition at a conceptual level.