Why Can't I Have a Normal Dog Like Everyone Else?
Instrumentation: Double Bass
1999 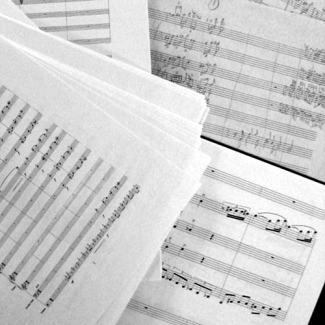 These are two short pieces for solo double-bass inspired by Snoopy, a childhood hero of mine.

I. Joe Cool
The double bass seems to be very well suited to a composition about Joe Cool. When Snoopy donned his sunglasses and sweater, he became the epitome of cool. The double bass, played pizzicato in a jazz style, carries those same connotations of cool. It was this sound that I used to create this movement. To add further interest, I turned the bass into a giant drum by having the player slap it in various places. This percussive use of the bass is not new, however I used these sounds in a slightly different manner. Thinking of the different places that would be slapped as different drums, I was able to conceive the percussion parts as though they were written for drum set. This allowed me to enhance the idea of the cool bass by composing a duet for bass and drums playable on one instrument.

II. World War One Flying Ace
The form for this movement is based loosely on La guerre, a préogramme chanson by Clement Jannequin. La guerre was written in honor of King Louis I to commemorate his victory in battle. La guerre begins with a text setting that sings the praises of Louis I, and then the singers are called upon to imitate musically the sounds of battle. Substituting Snoopy for Louis I, and a double bass for the consort of singers, I have attempted to create a new programme chanson. This one opens with two themes: one more militant to depict our hero boarding his Sopwith Camel, and one that “sings his praises.” These themes are transformed for the middle section where the bassist is called on to imitate musically the dogfight between our Flying Ace and the Red Baron. This movement closes with the same two themes from the beginning. However, this time they are presented in a sadder light because, alas, the Red Baron always wins and our Flying Ace always gets shot down.