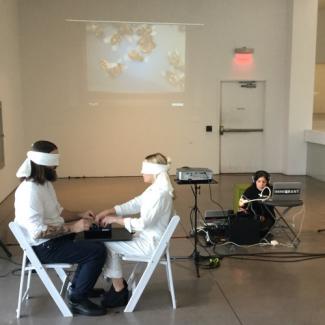 LiVEART.US, Performance Art initiative created and organized by artist, and independent curator, Hector Canonge, welcomes the presentation of the special program “Performance & Documentation” in collaboration with Emergency INDEX featuring the work of local artists, and the release of INDEX Vol. 7, a publication that brings together 260 performance works from 51 countries, documented and discussed by their creators.

This month’s program, a jointly effort by the makers and editors of Emergency INDEX and LiVEART.US, brings together, performance-makers and editors to address the performance-maker’s struggle for their voice in the framing and discussion of their own work, and to think about self-documentation, introspective practices, and how artists see themselves in Performance Art. Guest artists featured in the new publication, INDEX Vol. 7, will perform and join in the panel discussion with curators, editors, and art administrators.

LiVEART.US is platform established to support and feature works by local, national, and international artists working in Performance Art and its diverse manifestations. Created and organized by interdisciplinary artist, Hector Canonge, LiVEART.US features works where the body, as main instrument for artistic creation and expression, is the catalyst for sensorial experiences, cultural interpretation, and critical reflection. The program’s main objective is to further support the creation and presentation of new works in Live Action Art in an environment suitable for reflection and dialogue. LiVEART.US follows and complements the monthly program TALKaCTIVE initiated by Canonge in September 2015. Since its inception in 2016, LiVEART.US has presented the work of artists from diverse cultural backgrounds, ages, gender, and national origin creating a dynamic structure and an international network for the exploration, experimentation and execution of Live Art practices.