on the other side of the glass plate, she wore nothing
Instrumentation: Live Electronics
2008 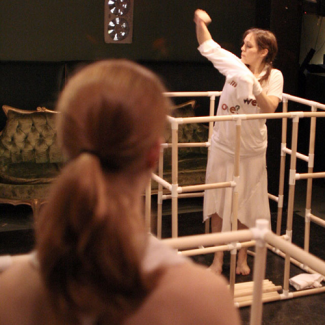 On the other side… was the second piece created with Esther Palmer and Shana Burns as part of our [Link]Seen Performance[/LINK] project. It was envisioned by Esther and explored ideas about fashion and self-image. I created a soundscape for the performance that included sampled sounds of clothing, looped percussion, electric piano melodies, and samples of Richard Dawkins voice.

When the doors open, the show begins.

The stage is scattered with wooden dowels and pvc fittings, but "performers" are absent. Three FOH Ladies in pretty dresses talk of clothing and whimsically burst into tiny ensemble dances. They generate a friendly mood, guiding viewers to become a single entity. Before the starting ritual is done, the audience – now a group – has built the set: two human scale boxes out of modular sections (ingeniously designed by Shana McKay Burns to play with the viewer’s visual perception of physical boundary). The Group fulfills a moment of choreography as they play together to decipher the correct construction method, and bring a new level of attention to the “stage” where the “performers” belong.

When those performers, Amiti Perry and Esther m Palmer, do finally “take” the stage, Esther inhabiting one box and Amiti steadily circling the other, David Morneau’s live-mixed sound score immediately establishes the environment for the tale, with music created from clothing elements – fabric, buckles, scissors – and lecture excerpts from evolutionary biologist Richard Dawkins. The text directs the audience to see the image onstage and in their actions in the language of different worlds, and the sonic landscape eases the journey.

The Women on stage travel through a ritual: take the boxes apart, put them back together, take them apart to discard them, and return again to rebuild. Similarly they put on and take off, pick up and discard T-shirts with questions and claims sewn on to them. The costumes, designed and created by Elle Chyun, create a rhythmic action for the Women. Amiti treads through repetition and gradual change, building an image of who she might be. Every action is a careful choice and Esther watches patiently, waiting for a shift and a discovery.