The Ballad of Milt Famey 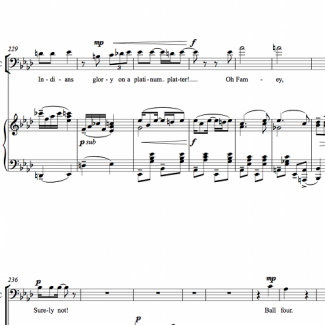 The Ballad of Milt Famey tells the story of the 1920 World Series between the Brooklyn Dodgers and the Cleveland Indians. The pitcher for the Dodgers was a young Milt Famey, who had compiled the greatest win-loss record in the history of the National League. His ERA was incredibly low, a stunning 0.38. In the season leading to the World Series Famey had won 38 flawlessly pitched games with zero losses. This amazing feat has never since been matched.

So why don’t we all know who he is? We know Babe Ruth and Jackie Robinson and Hank Aaron, but not Milt Famey. For all of his skill and prowess he never won the World Series. Famey struggled with alcohol, and attempted to close the seventh game of the 1920 series while severely drunk. This great pitcher threw four balls, walking Elmer Smith and losing the game and the series. He never recovered from that loss, and the rest of his career was unremarkable.

[based on research by Edward Morneau]

This opera was composed for The Remarkable Theater Brigade’s 2012 Opera Shorts.