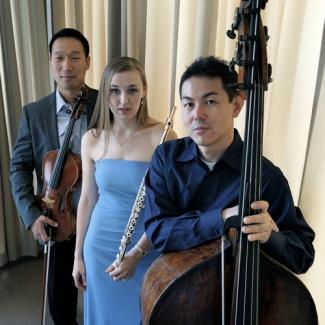 The Bateira Trio brings new life to traditional works and has a bold approach to new music. A mixed ensemble of flute and strings, Bateira’s unique timbre is best described by composer, Vivian Li: “fresh sounds that, when pureed, make a wholesome drink for your spirit.”

Comprised of flutist, Sandy Hughes, violist, Conway Kuo, and double bassist, Satoshi Okamoto, the New York City-based ensemble was born from a group of musicians and friends that enjoyed animated conversation over a platter of Bateira Sushi. The unusual trio began by performing at church services and other community events, but since its founding in 2006, Bateira has broadened its horizons. The Bateira Trio has performed at Trinity Church, Jan Hus Church, The Met Museum, and The Harvard Club, among other New York City venues, in solo recital, for new music events, and on chamber music series. Their repertoire includes both the conventional and the avant-garde, ranging from Medieval to Contemporary.

In 2012, the Bateira Trio participated in Vox Novus's Fifteen Minutes of Fame series, featuring world premieres of fifteen one-minute pieces written especially for the group. As part of the ensemble’s Carnegie Hall debut this coming January, Bateira will again present all fifteen original works. Champions of new music, the Bateira Trio continues its collaborations with both established and blossoming composers, enlarging the repertoire for this lovely combination of colors.