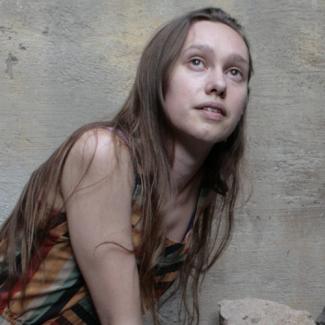 Gelsey Bell is a singer, songwriter, and scholar. She has released five albums of original music. Her most recent song cycle was commissioned by Roulette and the Jerome Foundation. She was awarded the 2012 Stefanos Tsigrimanis Artistic Scholar Award and a 2013 fellowship from VCCA. Her work has been presented in the Vital Vox festival, the BEAT festival, and the SITE festival. Gelsey is a core member of thingNY and Varispeed. She has worked with numerous others as a performer and collaborator, including Robert Ashley, Jonathan Bepler, Matthew Barney, Yasuko Yokoshi, Kimberly Bartosik, Chris Cochrane and Fast Forward (as the Chutneys), Dave Malloy, Rachel Chavkin, and John King. [gelseybell.com]