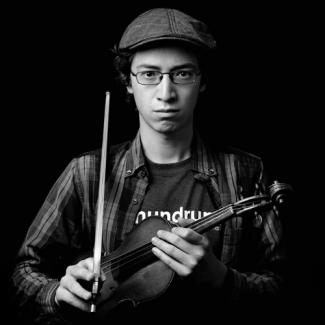 Jeffrey Young is a violinist and composer from Brooklyn, NY who specializes in experimental classical music and rock music. He regularly performs alone on violin and laptop and with groups including thingNY, Food Will Win the War, Streams of Whiskey, and This Ambitious Orchestra. He has worked with Pierre Boulez during four summers at the Lucerne Festival Academy in Switzerland, played at the Bang on a Can, National Repertory Orchestra, and Aspen Festivals, and twice toured China as an orchestral violinist. Jeffrey has also appeared on The Late Show with David Letterman and The Rachael Ray Show. He graduated from the Oberlin Conservatory of Music in 2007. [jeffrey-young.com]