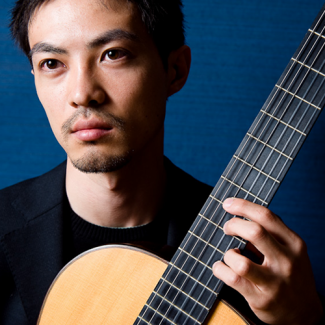 Kenji Haba is a guitarist who heralds a new direction for classical guitar through his insight and work with the coloration of sounds. He is an active performer of contemporary music, with over 20 pieces of music written for and premiered by him, including works featured in classical guitar magazines in Japan as well as the US. He is well known for his interpretation of Toru Takemitsu, his performances having been described as an “ideal match for Takemitsu’s music” by Fanfare.
Mr. Haba is the founder of award-winning guitar-cello ensemble, Duo Anova with cellist, Susan D. Mandel. In 2014, Duo Anova won an honorable mention award in the SMIA chamber music competition. In the same year, Duo Anova made its debut at prestigious Carnegie Hall presented by Composer’s Voice, and praised as exhibiting a “striking compatibility” by New Music for the 21st Century.
In 2001, Mr. Haba moved from Japan to U.S. to study Business, and worked for an accounting firm in NY. However, at age of 25, he listened to the sound of the master guitarist, Andres Segovia, and he came to an epiphany and realized he needed to pursue the art of the guitar