Neighbors will be a staged musical performance based on the series of Neighbors books by George Held, featuring music composed by David Morneau and performed by sopranos Christina Hourihan and Anastasia Rege and guitarist Kenji Haba. Selections from each book in the series—Neighbors: The Yard Critters Book 1, Neighbors: The Yard Critters Too, and Neighbors: The Water Critters—will be set to music and connected with short spoken introductions written by George especially for this project. Neighbors will be staged, costumed, and presented as children’s theater, though it is intended for anyone delighted by clever words and joyful music.

Ostensibly for children, George’s poems have an appeal and wit suitable for every age. Rather than following the too-frequent trend of talking down to children, he writes in a way that stretches and challenges young minds. David’s goal with the music is to capture this sophistication and humor using only a guitar and voices—the classic combination for both folk- and children’s music. David is taking familiar conventions and using them in unexpected ways to illuminate and support the poems.

Christina, Ana, and Kenji each bring mastery of craft and an engaging presence to their performances. Together they provide the right combination of wit, elegance, and warmth needed for Neighbors. Leading up to the full production of Neighbors in 2017, they will be presenting selected songs in recitals and concerts in and around New York. 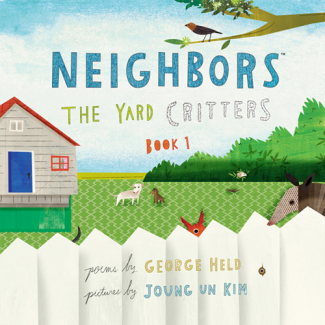