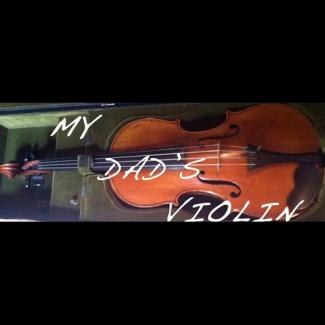 Douglas DaSilva created a project to celebrate the violin belonging to his father. Here is his description of the project:

A Brief & Incomplete History of a Violin
Many years ago (1940’s) in North-Eastern Brazil, my Uncle Zé, gave my father a generous gift. My father had mentioned that he would love to study violin; but being a student in the seminary he had no money to buy one. Tio Zé gave my Dad a violin (Breton, crafted in France, circa 1820). How this violin ended up in rural Brasil in the 1940’s and how my uncle had the means to purchase it is a mystery that I hope to someday unravel.
My father brought this violin with him to America where he briefly studied at Peabody Conservatory and kept it with him through jobs, marriage and children.
A few years ago my father put me in charge of this family heirloom.

The Project
While in my charge, I have asked violinists to try it out so that I could hear what it should sound like. It has a warm, full sound.
In April 2011, I asked violinist Greg Durozel if he wouldn’t mind trying out my Dad’s violin while I filmed him. When I showed this 55 second video to my Dad the next night, he was brought to tears and insisted that I burn a DVD of it so that he could share it with his brother Zé (age 90+) in Brazil that coming August, 2011.
This sparked the idea that I could make a more significant DVD by filming a whole bunch of violinist playing this violin. So did: I recorded some great violinists performing on My Dad's Violin: Lynn Bechtold; Greg Doruzel ; Ari Isaacman-Beck; Shem Guibbory; Josh Henderson; Hayne Kim; Conway Kuo; Bin Lu; Jessie Montgomery; Kurt Nikkanen; Paul Peabody; Suzie Perelman; Daniel Reed; Michael Roth; Andrew Schaw ; Curtis Stewart; Stefanie Taylor; Shelby Yamin.

I filmed in apartments, churches, backstage at concert and ballet halls, street corners, Central Park and in front of the Bartok plaque on the Upper West Side.!
This past August, in Brazil I surprised my father, his brother and our families with the video. There were speeches, tears, toasts and hugs!

It is my goal to continue on this path and get as many violinists as possible to share in this project. It is much more than a “music video” but a way to celebrate 86 years of brotherhood.
I have already started on this mission with my recent trip to Romania where I had some great violinists perform on this violin.

Many people were touched by this project and enthusiastically encouraged me to make a “proper” documentary. So, this is the creative journey that I am embarking on.
I will be filming in New York, Brazil and France in 2012. These locations are essential for telling the history of the violin.

Please let me know if you'd like to be a part of this project.