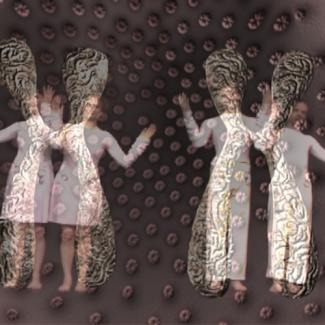 This piece was initially created as a live dance for Dr. Susan Fisher's Biology 101 course at The Ohio State University. The initial success of the performances led to the realization that it would be difficult to present year after year since new dancers would need to learn it. The decision was made to film the work and create a 3D animation for DVD presentation. At this point I was engaged to compose new music for the final video.

from ACCAD's site:
A video dance interpretation of chromosome movement is accompanied by an animated computer visualization of the cell replication process.The resulting video is designed to serve as a supplemental learning object for Biology 101 students studying DNA processes. The simplistic or static visual aid currently available to students for learning this complex topic does not sufficiently convey the role of chromosome and DNA movement. In engaging a variety of media for such visualization, Dr. Fisher is hoping to create an experience that will work on informational and metaphoric level, engage different learning styles and inspire student interest in biology.

The music needed to reflect the biological concept for the piece so I created four small motives that would act as cells, replicating themselves freely as the music grows. These motives layered on top of each other in various ways—resulting in a constantly shifting, cheerful, bouncing texture.