In Other Words
Instrumentation: Clarinet, Piano
2003

In Other Words… score 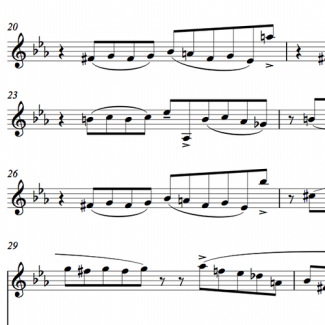 Composed for W. Bruce Curlette, this piece is a celebration of the music of Charles Mingus. It grew out of a love for his work and an interest in certain ideas concerning the so-called "third stream"—the combining of classical and jazz traditions. In Other Words… is loosley based on two Mingus compositions: Goodbye Porkpie Hat and Better Git It In Your Soul.

The title is take from the opening passage of Mingus's autobiography, Beneath the Underdog:

In other words, I am three. One man stands forever in the middle, unconcerned, unmoved, watching, waiting to be allowed to express what he sees to the other two. The second man is like a frightened animal that attacks for fear of being attacked. Then there’s an over-loving gentle person who lets people into the uttermost sacred temple of his being and he’ll take insults and be trusting and sign contracts without reading them and get talked down to working cheap or for nothing, and when he realizes what’s been done to him he feels like killing and destroying everything around him including himself or being so stupid. But he can’t – he goes back inside himself.

Which one is real?