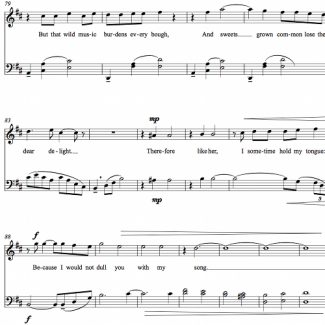 This is an alternate arrangement of My Song for soprano and cello.

The Twenty-Four Hour Song
Even your maker would not think you proud
if she could repossess your eyes and see
the green courtyards
in morning lengthening
to fit your seeing soul's geometry—
and how you wished they would stay as they were,
like a girl's face before you spoke to her.

The autumn overturns coffers of light,
freeze-frames their fall and calls it hickory.
A final kite
threads on the loom
of noon—a day tips toward memory—
setting, you walk on through the rest-stop hours,
watch rays age on planked storefronts, in the towers
of cloud.
Rise in yourself but set in me.
In rest-stop towns you are forgetting me.

I have not seen you sleep, but I saw tapes
of sleeping men, and they all wear the same
unwanting face
—unwanting everything—
that you look through before you turn again—

Sonnet 102
My love is strengthened, though more weak in seeming;
I love not less, though less the show appear;
That love is merchandized, whose rich esteeming,
The owner's tongue doth publish every where.
Our love was new, and then but in the spring,
When I was wont to greet it with my lays;
As Philomel in summer's front doth sing,
And stops his pipe in growth of riper days:
Not that the summer is less pleasant now
Than when her mournful hymns did hush the night,
But that wild music burthens every bough,
And sweets grown common lose their dear delight.
Therefore like her, I sometime hold my tongue:
Because I would not dull you with my song.