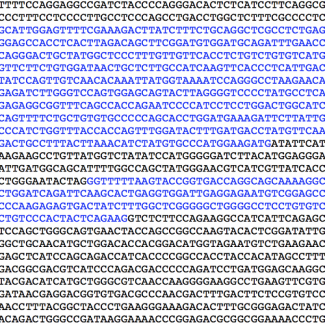 Commissioned by Dr. Susan Fisher at OSU for her biology course, this piece used Max/MSP to generate music based on DNA segments. The music does not have a one-to-one correspondence with segments of the DNA code, instead it will use the process of DNA translation as a metaphor for the compositional process.

Problem
This piece will need to represent, in a meaningful way, the structure and function of DNA. The purpose of this representation is two-fold. As a metaphor it will serve as an instructional aid for the instruction of basic biological concepts. As an artistic endeavor it will explore the relationship between the rigid chromosomal code dictating our physical design and function and the intangible consciousness that seems to belie the very code from which each of us, and indeed every living organism, is built.

Concept
My conceptual inspiration was drawn from Richard Dawkins’ book, The Selfish Gene. The core idea in Dawkins’ writing is that the primary agent of evolutionary development and selection is the gene.

Our genes began their existence as simple chemical compounds with the improbable ability to replicate themselves. These replicators gradually became more complex and their chemical resources became scarce, forcing them to compete for their survival. Dawkins argues that the two primary survival mechanisms became the development of protective barriers and the eventual cooperation between replicators, which led to the development of colonies of replicators working together for their survival. Whatever became of the replicators? Where are they now?

Now they swarm in huge colonies, safe inside gigantic lumbering robots, sealed off from the outside world, communicating with it by tortuous indirect routes, manipulating it by remote control. They are in you and in me; they created us, body and mind; and their preservation is the ultimate rationale for our existence. They have come a long way, those replicators. Now they go by the name of genes, and we are their survival machines.*

There is an inherent tension between this explanation for our existence and the way that we experience our existence. Genetic code does not account for emotion, creativity, friendship, or any of the other subtleties of our day to day existence. It is this tension that I hoped to explore.

Solution
I decided to focus on the function of DNA. Simply converting nucleotide bases (A, C, G, T) or codons (groups of three bases) into discrete musical events will not provide an interesting artistic experience. Plus, this makes a faulty assumption about DNA in general: specific segments in the code correspond with specific parts or traits of the organism. The truth is more complex than that. Matt Ridley, in his book Genome, addresses this assumption by asserting that the metaphor of a recipe is better for understanding genetic code than the metaphor of a blueprint:

…each part of a blueprint makes an equivalent part of a machine or building; each sentence of a recipe book does not make a different mouthful of cake.**

To that end, I created a list of rules and functions to convert the code into a musical composition. The rules are encased in an algorithm built using Max/MSP. This algorithm takes the protein data and uses it to interact with a sine wave and white noise generators. In my metaphor these generators are equivalent to the chemical atoms utilized by proteins, specifically oxygen, carbon, and hydrogen.

Once the music was generated and recorded, I composed a score for use by a human performer playing flute. The sound generated from the algorithm will accompany the live performance. The tension between rigid code and subtle existence will be realized by allowing the score to flex at certain points to accommodate artistic choices by the performer.

Complete documentation of the project can be found in the attached pdf document.