The Sincerest Form of Flattery score 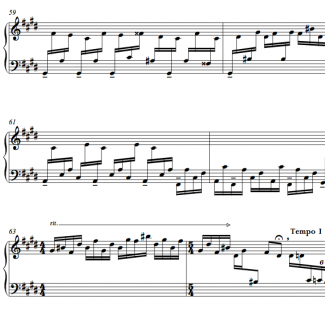 When marimbist Brenton Dunnington asked me to compose a new piece for him, I chose to pay homage to J.S. Bach. As a composer I often will go to Bach when I’m feeling uninspired or creatively drained. His scores are an eternal source of wonderment for me. He was a master of style and counterpoint. He was efficient with his materials. And he gave his music an intensity and energy that belie its complexity. His is a music I aspire to, not in style, but in construction. This suite then is a reflection on Bach’s music and how it has influenced my own work.

Formally, I modified the traditional Baroque suite by substituting a ballad for the courante and a waltz for the sarabande. Each movement celebrates a different aspect of Bach. The Prelude is the most like his music in terms of style and structure. It is built from a continuous series of arpeggiated chords, which move in both predictable and unexpected ways throughout the large-scale tonal structure. The Allemande is presented in a recitative style, expanding simple cadential formulas into virtuosic flourishes and transforming the regular rhythm of this dance into a dialog between contrasting styles and registers. The Ballad and the Waltz are companion pieces, sharing a motif and forming a complete motion through harmonic space. The Ballad exploits the beautiful sound of softly rolled chords, particularly well suited to the marimba. The Waltz, by contrast, is very pointed and dry, bursting with sly sarcasm. It proceeds, without stop, directly into the Gigue. In this final movement, the motives are quotes from Bach’s cello suites. They are piled together in the midst of constantly escalating momentum, hurtling together toward a virtuosic climax, which takes advantage of Brenton’s prodigious talent.