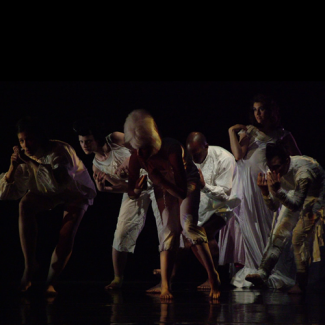 This is an electronic score to accompany dance by choreographer/video artist Ashley A. Friend. The score is played back through Max/MSP so that it can move from section to section with the dancers in real time. The dance was created as a way for Ashley to deal with her own experiences with epilepsy. Visually she draws inspiration from many sources, including many classic horror movie motifs. The sounds and music used in the score are taken from a variety of sources, cut apart, mutated, and carefully sewn together à la Frankenstein’s monster.

from the program notes:
This piece sets the foundation for the motivations of Friend's study into a new movement vocabulary called the "scary body". The "scary body" is initiated when impediments or prosthetic props are attached to the dancers' bodies and they are given choreography and are required to compromise the movement accordingly....Triage was also influenced by early horror films such as Frankenstein, The Cabinet of Dr. Caligari, and Dr. Jekyll and Mr. Hyde. Triage: Part 1 is enmeshed with content and teeming with interpretations as the viewer can absorb, surrender, or struggle with the dancers as the composition unfolds. – Ashley A. Friend

The music for Triage: Part 1 evolved slowly over time. I attended rehearsals with the dancers on a weekly basis to watch the movement come together and to find inspiration and ideas for my own work.

the concept
While Ashley looked to many sources for inspiration and concept, I chose to focus the music through one specific conceptual idea. Early in the collaboration she and I discussed several classic horror movies and how they related with what the piece was going to be. One of the movies that we kept coming back to was Frankenstein. Since the final piece was going to be a series of episodes in different moods and styles it seemed natural to take the metaphor of Frankenstein’s monster as the model for the score. To that end I found fragments of existing music which I took, manipulated and sewed together to create an entire composition. The sources include Bach’s Toccata and Fugue in d minor, Bach’s Mass in b minor, Saint-Saens’ Dance Macabre, Shostakovich’s Jazz Suite no. 1, and a traditional church chorale, as well as references to the music of XTC, Marilyn Manson, and Michael Jackson.

the construction
As with any creative effort, this piece was often changing as sections were added, refined, and re-ordered. I wanted to make the music flexible enough in its construction to deal with that. Plus I wanted it to be flexible in the performance setting so that the dancers could be expressive in their movement without needing to worry about getting ahead of or behind the music (a constant challenge of using pre-recorded and electronic music in conjunction with live performers.)

My solution was to build a patch in Max/MSP that allowed me to tie certain cue points in the music with specific moments in the choreography. I ended up creating 27 separate audio files that were designed to overlap in certain ways so that I could jump to the next cue when needed without there being an obvious change of track to the listener. In addition, there were another 12 audio files that would come in and out of the background as needed. The primary challenge then was not the construction of the Max patch, but the creation of a score that could flex to take up more or less time as each performance required.