Where is Tokyo?
Instrumentation: Fixed Media
2005 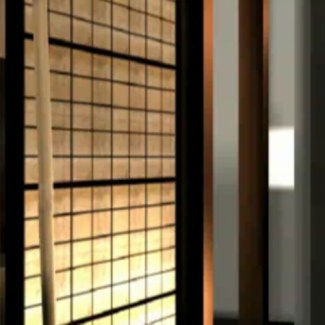 This piece is the product of a collaboration with choreographer Esther Palmer . My work included the construction of a virtual soundscape as well as a musical score.

Where Is Tokyo? is built into Studio 5 (Sullivant Hall, OSU Department of Dance) and reconstructs spatially a brief scene from Late Spring [1949 film by Ozu Yasujiro] in which two characters look out over the rock garden at the Ryoan temple in Kyoto.

The reconstruction focuses on the nature of the porch as a framing device for experiencing the tranquility of the rock garden. Thus the set incorporates the porch and its function of describing a spectator’s perspective.

Additionally, the set up recreates the reference image and puts the audience inside that recreation. Each run of the show therefore will admit only 2 spectators, who will be seated on the porch as designated by the reference image.

A screen on the front of the porch will frame which portion of the performing space the spectators can see, in an effort to mimic the frame of a movie screen.

The audience will look onto a space of 2D design and 3D action, with a virtual set projected through the live set onto two screens at the far end of the room. The virtual set extends the design of the actual set into a building with several distinct spaces.

Animations of movement through the building are designed to “dance” with the live performer, contributing equally to the choreography for the work as a whole.

the music
In order to accommodate the visual conception of the piece, the audio inhabited both the real 3D of the set space and the virtual 3D of the animation. For the animation I created a soundscape that moved in stereo to follow the camera through that virtual space. For the set space I composed music that was played through a portable CD player, separating it from the speakers for the soundscape.

In order to work within the context of the piece, the music became a part of the space rather than simply being painted over everything. To this end, the music was played through a portable CD player situated off-axis from the audience. This setup separated the music from the soundscape and positioned the music playback so that it was a natural part of the set—like the radio in an average house.

The music itself is a remix/collage of a recorded performance of an older piece of mine. The original, Elegy for Sophie, was composed as a gift to my aunt and uncle when their cat Sophie passed away. The score to Elegy for Sophie can be seen [LINK]here[/LINK].

This piece is the source material because it has the simplicity and elegance I associate with Japanese culture. I am not intimately familiar with Japanese music and did not want to make direct references, as these would capture only a few cliches. Instead I wanted a conceptual allusion.

The recording is from a sensitive performance by Tom Moss. The concert was at the Urban Institute for Contemporary Art in Grand Rapids, Michigan. Their performance space is a large brick room that doubles as a movie theater. Incidental sounds from this space, as well as audience noise made their way into the recording. Since Where is Tokyo? explored the notion of space, building the music from a recording rich with spatial sound was natural.

the soundscape
An intriguing thing about this project was the union of the real and the virtual, the use of an animated environment to extend a real space. The combined space was conceived as a whole, creating the illusion of a larger world in which the piece was set. [see the floor plan]

The soundscape helped unify the perception real and the virtual, while maintaining a distinction between them. To accomplish this, the actual soundscape of the studio housing the set informed the sounds used in the animation soundscape.

Studio 5 in Sullivant Hall is not a space that was built with performance in mind. There are exposed ducts on the ceiling that make a fair amount of noise. One whole wall is covered in windows that allow outside noise in. and the walls only partially mask sounds from the adjoining rooms. Even though none of these sounds are over loud the studio has a distinct sonic character. Plus the animation required two projectors, each with its own fan adding to the soundscape in the room.

To complement and expand this existing soundscape, the animation's soundscape was built from similar sounds. I recorded many different air duct noises as well as the sounds of various motors and compressors from industrial strength air handlers. These were carefully mixed with natural sounds (leaves in the breeze, rain, ocean waves) to build the soundscape.

In performance the soundscape played back in stereo. Originally I wanted to use eight speaker surround. This concept was abandoned after careful consideration. The use of such a surround sound setup is too cinematic. Movie theater surround is designed to put the viewer in the middle of whatever world they are viewing on the screen. In Where is Tokyo? the actions and objects in the room were as important to the piece as what was shown on the screen. In fact, the audience viewed the screen through the set and heard sounds from the room and the set in addition to the sounds 'from' the screen. An eight speaker set-up would have placed undo importance on the animation soundscape, distracting from everything else. There is so much to see and hear with this piece that a careful balance needed to be maintained throughout. Simple stereo better served this balance.