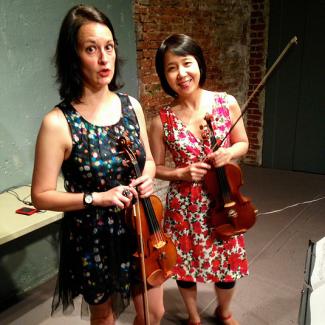 Miolina was formed in 2012 when artistic director/violinist Mioi Takeda decided to form a violin duo with longtime collaborator, violinist/composer Lynn Bechtold. To date, the duo has had successful performances in NYC at The Church of the Transfiguration, City Lore, Gallery MC, Greenwich House Music School, (le) Poisson Rouge, The Morbid Anatomy Museum, Parsons School of Design, Queens Library, Spectrum, St. Mark’s Church, and Turtle Bay Music School, as well as at Experimental Sound Studio in Chicago, at Monk Space in Los Angeles, and at the Cité Internationale des Arts and l’Institut Finlandais in Paris, France. In addition, they have performed on series and festivals such as Circuit Bridges, Composers Concordance, and Electronic Music Midwest. Miolina specializes in violin duo music that employs the natural beauty and sound of the instruments, with or without electronics and video. They enjoy collaborating on new compositions with composers, as well as discovering hidden gems of the past. In the last three years, they’ve premiered eleven new works. Some of their recent collaborators include cellist Jennifer DeVore and percussionists Ian Ding and Eric Millstein. Miolina’s future productions include creating music for silent Japanese films of the 1920s, and an educational program about immigration and its influence on composers. Both violinists are longtime advocates of new music, and have performed with various new music groups, including the American Symphony Orchestra, Composers Concordance, Glass Farm Ensemble, North/South Consonance, SEM Ensemble, & VIA. They are recipients of a 2015 grant from the Lower Manhattan Cultural Council, and a 2014 grant from New York Women Composers, and were recently granted 501(c)3 non-profit status. They will be recording their first album in late summer 2016.