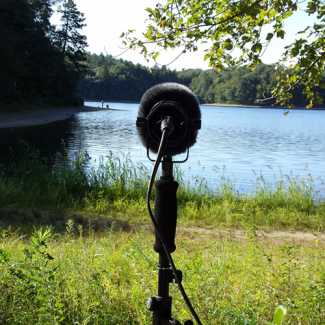 To celebrate the bicentennial of Henry David Thoreau’s birth, New Thread Quartet will perform the world premiere of David Morneau’s Not Less Than the Good at the Morgan Library & Museum on June 2, 2017. The world premiere performance will open the Morgan’s exhibition This Ever New Self: Thoreau and His Journal—the most comprehensive exhibition devoted to the life of one of America’s most influential authors and thinkers—and will feature poet J.D. McClatchy reading excerpts from Walden.

Not Less Than the Good is a musical sunrise, a celebration of morning as embraced by Thoreau in Walden. Thoreau wrote about morning as a metaphor for intellectual and spiritual awakening: “The morning, which is the most memorable season of the day, is the awakening hour.” Commissioned by New Thread Quartet and composed by David Morneau, Not Less Than the Good simulates a sunrise by combining the meditative playing of the saxophone quartet with ambient synthesizers. The music grows from a single quiet note, adding notes and timbres, growing in fullness and depth. Underneath this are sounds recorded during the pre-dawn and early morning hours at Walden Pond: a chorus of insects, the lone song of dawn’s first bird which is joined by others in a raucous counterpoint, and the splashing of morning swimmers. The hour-long performance is punctuated by readings of excerpts from Walden—a secular prayer of hope for enlightenment—performed by poet J. D. McClatchy.

Morneau composed Not Less Than the Good for the bicentennial of Thoreau’s birth (July 12, 2017). In Walden, Thoreau invites us to reject the life we’re expected to live, through a pursuit of self enlightenment, through the effort to wake up. His words remain vital today. “I know of no more encouraging fact than the unquestionable ability of man to elevate his life by a conscious endeavor.”

We live in a moment where our culture grows dark. Knowledge is trivialized. Greed is a virtue. Violence is too often the first answer. And happiness is promised with just one more purchase. Hope comes with the dawn. “We must learn to reawaken and keep ourselves awake, not by mechanical aids, but by an infinite expectation of the dawn, which does not forsake us in our soundest sleep."

Not Less Than the Good