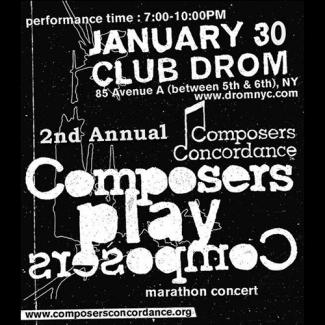 "Your time limit is four minutes; you must be one of the performers of your own work; it must be a chamber piece of no more than three players and the performance has to be live. Contact me immediately because we have invited eighty NY composers whom we the directors of Composers Concordance, rate highly. You should apply quickly because we only have space for twenty one."

Gene Pritsker, who is a young prolific composer known in New York and all over Europe for the way he integrates chamber music with hip hop, jazz and opera, will compere the evening and be ringmaster. "It's a collaborative effort," he says. " We want for everyone to spread the word and help bring attention to the show. This is a group bound by its enthusiasm for musical adventure. Many are trained in the academy, others are very downtown in their sensibility but all of us are exploring and combining idioms.

Composers of my generation believe in performing their own work. This is the era of the composer/performer. We all learned to play an instrument well in jazz or rock before the composer bug bit us".

The multi- faceted theme of the show is reinforced by live VJing. Astrid Steiner, who has presented her visual storytelling to live music most recently at the Shanghai Expo, uses her own photos and those of artists who inspire her.

The event is produced by Composers Concordance, which has been in operation for twenty-six years and given exposure to hundreds of NY composers. Recently Pritsker and composer colleague Dan Cooper, have taken over the direction of its concerts and are focusing on taking chamber music out of the concert hall and into club venues.

In another attempt to grow their audience beyond their dedicated followers, Pritsker says: "Rock and roll songs are often four minutes and growing shorter. This is the length of time listeners tend to focus on a work. If you don't like one of the pieces, well you don't need to get restless".

The event will be broken into sets, each of which will start off with a trio composed by John Clark on horn, Gene Pritsker on electric guitar and Dan Cooper on 7 string electric bass.

The program will mix genres and instrumentation over the sets but there are some patterns that emerge across the twenty-one works. Some are based on non-western traditions: A Jewish prayer (Dave Taylor) and a Serbian folk song (Milica Paranosic). Electronic works by Lynn Bechtold, Richard Carrick and David Morneau (whose work is inspired by Shakespeare's sonnets). Some are solo works with the composer performing on guitar, snare drum or keyboards.