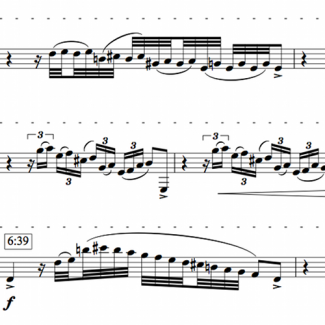 Even though he was one of music's great conservatives, it is often (and rightly) remarked that J.S. Bach was a great cosmopolitan—in his music the north countries meet southern Germany, France, and Italy in striking ways previously almost unknown. In the Passacaglia and Fugue in C minor, BWV 582, Bach joins together elements from distinct nations and traditions in ways that may be heard very close to the musical surface indeed.

Bach's House comes from the tradition of composers working with popular dance forms. From the minuet and the gigue, to the waltz and the foxtrot, to the bolero and the tango, there is a rich history of music written in these forms. Now, one of our modern forms—the dance club—is explored as the basis for a new work. The thumping “four-on-the-floor” bass pounding out every beat, the droning, looping synth lines, the harmonic stasis, and the seemingly boundless energy of this style come to the fore here.

Bach's House is based on JS Bach’s Passacaglia in c minor (BWV 582). Since the passacaglia is a form based on a repeated bass line it has a natural affinity with electronic dance music. This piece highlights Bach’s bass line, while paying homage to the piece’s drama. Because this work was commissioned by W Bruce Curlette, my college advisor and music theory professor, a mini-lecture has been infused into this virtuosic clarinet solo.