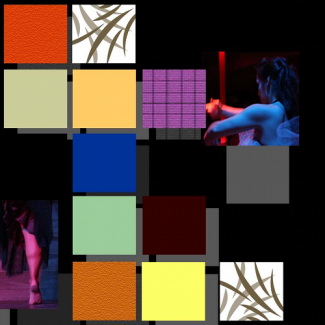 Formerly titled Lifedance, this soundtrack for dance by Amiti Perry (OSU Department of Dance) explores interpretation of one's life experiences as dance. Each performer in the company has created movements relating events from their own lives, which Amiti incorporated into the larger whole. The music parallels this concept by taking existing songs and sounds in some way significant, cutting them apart, and reassembling the pieces into a soundtrack collage.

concept
Imagine creating a soundtrack for your own life. What songs would you include? Would there be a lot of variety or would it be limited to only a few artists? Would the music you chose reflect significant events in your life, or would it reflect the wider culture around these events? This is the challenge faced here.

The other key concept for the music was dealing with ideas of copyright and fair use. We live in a world surrounded by a highly-calculated, market-driven soundtrack. The pop culture machine fills our lives with sound and noise—some invited, but most not. To create an accurate sonic portrait of an American life in the late 20th century, it is a given that samples will be appropriated from this overwhelming soundscape. Is it legal to do so? Those major corporations who continue to benefit from the hard work of others will say no, but our own copyright law has a provision for fair use. If only it would be reasonably applied.

This document may help shed some light on the music, or not…