False Heads, Masks, and Robots is a virtual exhibition that is the culmination of Rose’s interest in human possibilities, merging Artificial Intelligence, robotics, human brains, and bodies. For the past 25 years, Rose has been documenting an imaginary evolution of humans and now for three years produced over 200 drawings and paintings of the fusion of Homo sapiens and Robo sapiens.

False Heads, Masks, and Robots showcases 122 of these works. Rose’s portraits of humans wearing masks blur the lines between machines and persons. At once fearful, powerless, and surprised, Robo sapiens resolutely look at the viewers straight into their eyes over their masks, reminding us that we are already inventing our future.

False Heads, Masks, and Robots is exhibited from October 2 – November 16, 2020, in the third-floor ballroom of architect William L. Price’s former home, The Arches, which he built in 1899. Price had apprenticed in the studio of Frank Furness and would become one of the premier architects in the United States in the early twentieth century, through a body of work that demonstrated a great range of scale and tectonic innovation, known as the “Price Style.” In addition to richly ornamented mansions for self-made industrialists, Will Price designed massive public infrastructures (Chicago Terminal, Allegheny Station), and enormous hotels in Atlantic City, NJ, and Asheville, NC. The massive Traymore and Blenheim Hotels, both demolished in the 1970s, were among the earliest cast concrete structures. Yet Price also created simple and thoughtfully wrought private residences, for developers and by his own invention. Price founded, built and lived in, two utopian communities; one committed to the Arts and Crafts movement (Rose Valley, PA) and the other to the progressive Single Tax movement (Arden, DE). The ballroom reflects Price’s deep appreciation for theatre and performance.

As a complement to Rose’s work, Melissa Grey & David Morneau have composed a sound installation on the stairway landings leading to the exhibition; they will be releasing an album of sound and video, featuring Dan’s voice, November 16th. 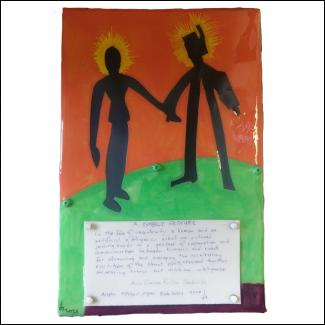