Love Songs is my songwriting project that paired sonnets by William Shakespeare with contemporary poems. Each collaborating poet selected one sonnet and paired it with something of their own—either an existing poem or one written especially for this project. The nature of each pairing was left to the poet so that the works may compliment, contradict, or simply co-exist.

I set each pair simply, drawing on the structures and sensibilities of familiar love songs from popular music idioms. The goal is to compose in that small slice of common ground where art song and pop song overlap.

Origins: While I was working for the library at The Ohio State University I discovered a handmade birthday card that someone left behind in a returned book. This kind of thing happened often, people left bookmarks, homework, photos, mail, and other papers in the books. It was not uncommon for these items to be left in returned books undiscovered until the book was requested again. This card was one of those.

I kept it because it's handmade and clear that the maker (Karen) loved the recipient (Brad), but for whatever reason he left it a book that wasn't his. We can't know why, but it always seemed sad to me that she had put such love and care into a card and he'd simply misplaced it.

I kept the card, and the postcard inside, knowing that I wanted to include it in some future project…

Then, in 2009, I was putting together a proposal for a residency. I was thinking about simple, melodic music, and searching for a project idea that would feature just such writing. Slowly "Love Songs" formed in my thoughts. Exploring the musical space where art song and pop song overlap would be just the thing. Even though I didn't win the residency, I still wanted to do the project, and here we are. 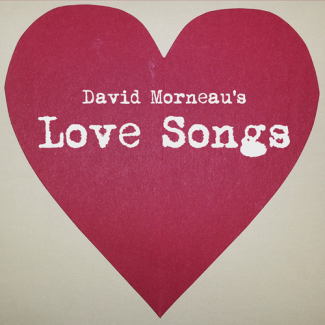